A New Beginning for a Community 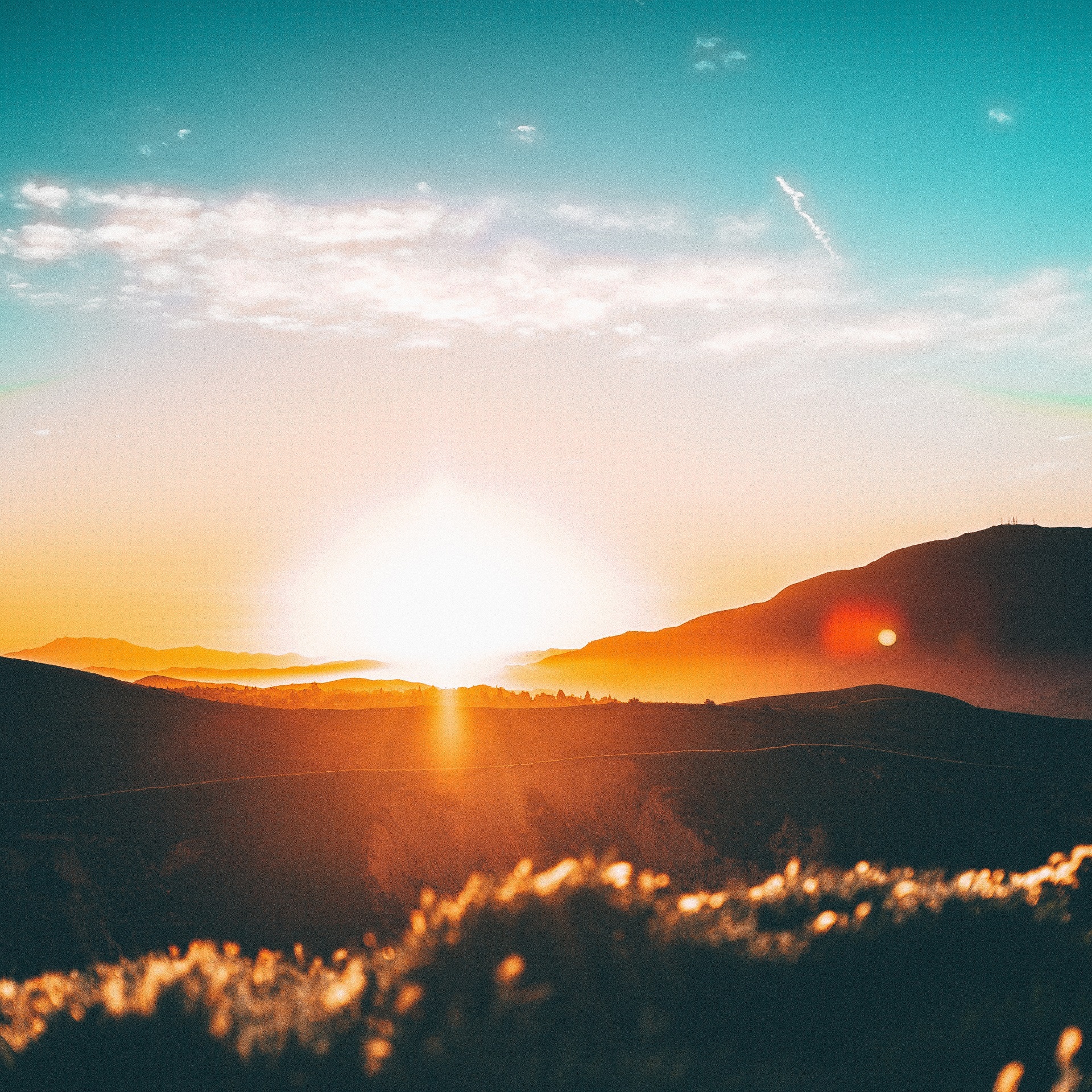 FROM UNJUST EXCLUSION TO NEW PERSPECTIVES ON LIFE AND FAITH

In the beginning of 2011, a large number of today’s members of SABAH suffered a painful and unjust exclusion from the religious place where they started. Unfortunately, they were forced out of the faith community that was their religious home and place they came together for unity and friendship. Leaving their previous place of worship for a new  one was their only recourse as it was the only way of spiritual survival. For these people, moving ahead in search of a new place was widened, deepened, broadened, and transformed. In the new place they found freedom to receive what their religion, with its teachings about spirituality, had to offer them, with new perspectives on life and faith. They see things today from their newly rediscovered home that they had never noticed before.[1]

SABAH, aka American Islamic Center, was founded in 2011, and, in spite of a short and turbulent history, it survived through the years because of its faithful membership. Young families began to join and the congregation became a family, and they knew something special had begun.

NEVER FAILED TO OFFER SERVICES TO THE MEMBERS

Once American Islamic Center reached membership capacity in 2012, it began looking for temporary homes. American Islamic College, Office Building in Glenview, ISNS in Rolling Meadows, TASC in Mount Prospect were facilities where the community offered its services to the members, primarily to over 100 kids who learned about their religion and dreamed about their own permanent spiritual home.

They cannot describe all of the miracles God has performed, the faithful dedication of the SABAH family or the amount of work young people have put into this project to make this happen. It proves that when people come together with a clearly defined goal that anything is possible. This was the community that was unjustly forced out of their former mosque, then unjustly denied a zoning permit to build their mosque, but, today, the mosque is fully built, bigger and more beautiful than originally envisioned: a large prayer hall on main floor with additional space on the balcony, a spacious gym and a community event hall, seven fully furnished classrooms, a tea room or Bosnian Room (divanhana), a library, a conference room, youth center, administration offices, a gorgeous green courtyard, and a house used for charitable outreach in the area along with the Lutheran community they bought property from. All thanks to God.

THIS IS NOT JUST A GREAT BUILDING, THIS IS A GREAT COMMUNITY

More importantly, there is a vibrant and beautiful community buzzing around, free to practice their faith, healthy and alive: imam, youth workers, school teachers, administrators, women’s group, children groups, Saturday School, singing group, folk dance performance group, cultural ambassadors, and charity work volunteers. “This is not just a great building, this is a great community”, states CAIR-Chicago chairman Ahmed Rehab and adds “I could only thank them and congratulate the real heroes, for their courage. Muslims who refuse to be broken. And no one has suffered more as a result of religious persecution than one of the only native Muslim communities in Europe: Bosnians and others who endured discrimination, torture, rape, death, destruction and genocide just because they believed differently, just because they were Muslim. And, so, when they came to a new land in search of this elusive freedom of religious expression, only to once again faced discrimination; we were fully prepared to ensure: ‘not on our watch!'”[2]

With interfaith dialogue, this community builds bridges of understanding with other faith communities – Christians and Jews. There is a charity work that serves the needy, regardless of their faith. And members of this community are out in the broader community, working for social justice and urban development, doing all sorts of work. Some of them are doctors, some of them are community leaders, all of them are doing extraordinary work not just in the Muslim community but in the broader American community. And they are proud of their work in business, social justice and education. President Barack Obama stated in his remarks at Islamic Society of Baltimore on February 03, 2016: “And like so many faiths, Islam is rooted in a commitment to compassion and mercy and justice and charity. Whoever wants to enter paradise, the Prophet Muhammad taught, ‘let him treat the way he would love to be treated.'” This community has been doing exactly that. Not only did president Obama speak in favor of Islam and Muslims, but Thomas Jefferson and John Adams had their own copies of the Qur’an, too. Benjamin Franklin wrote that “even if the Mufti of Constantinople were to send missionary to preach to us, he would find a pulpit at his service.”

According to the Pew Research Center, Muslims in America hail from more than 75 countries, thus the country’s more than 2,000 mosques vary widely in tradition and practice. Straddled between a predominantly Arab and South Asian Indo-Pak Muslim population and their American neighbors and coworkers, Bosnian Muslims struggle to resist complete assimilation into American melting pot and to protect their European Muslim heritage and culture.

“For those who give in charity, men and women, and loan to Allah a Beautiful Loan, it shall be increased manifold (to their credit), and they shall have (besides) a liberal reward.” Qur’an, 57:18

[1] SABAH Islamic and Cultural Center was officially opened on 7 September 2019. The spectacular Grand Opening event was attended by the Grand Mufti of Bosnia and Herzegovina’s envoy, Mufti of ICNAB, mayor of Franklin Park, imams, members and guests. The honor to open the Center was given to Anisa and Ermin Arslanagic. 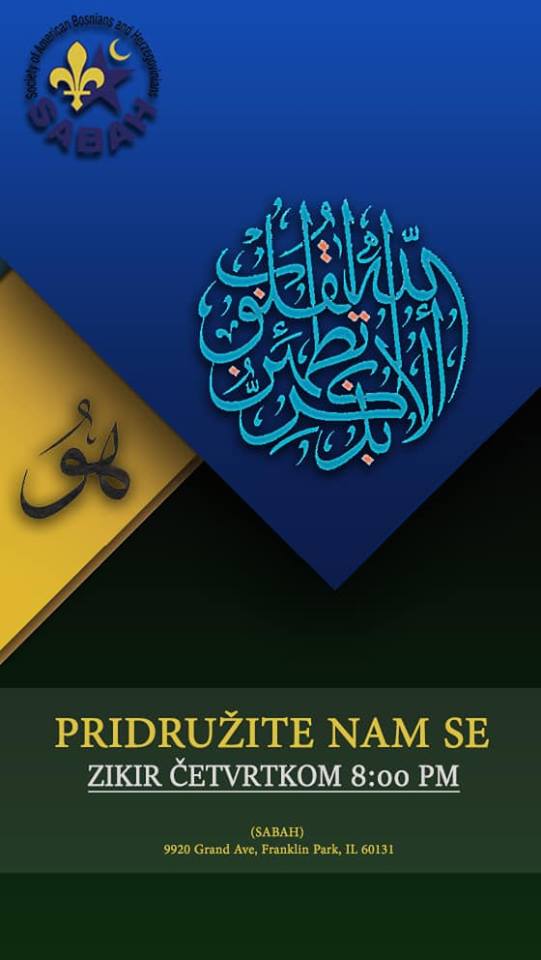 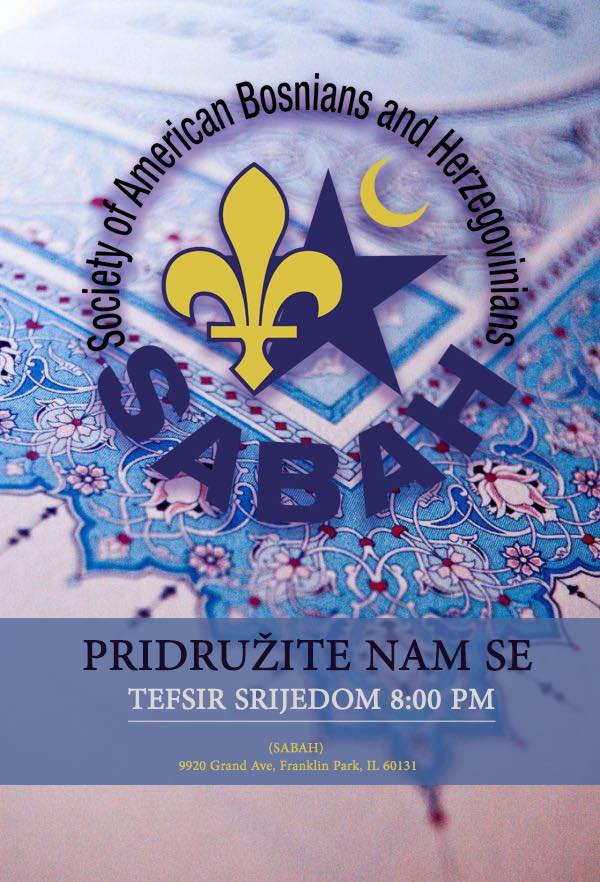 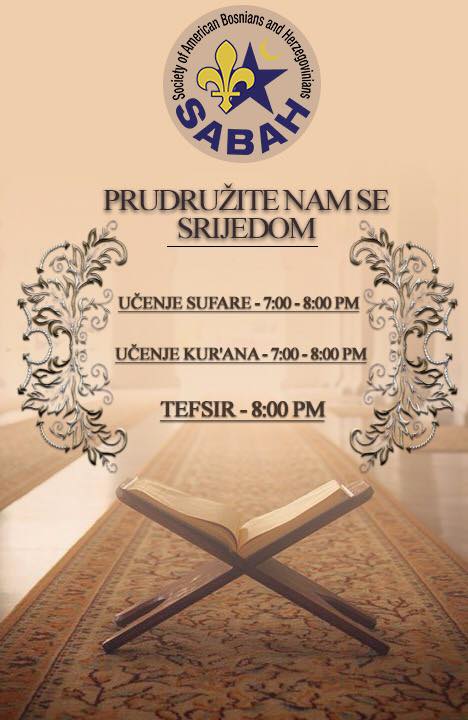